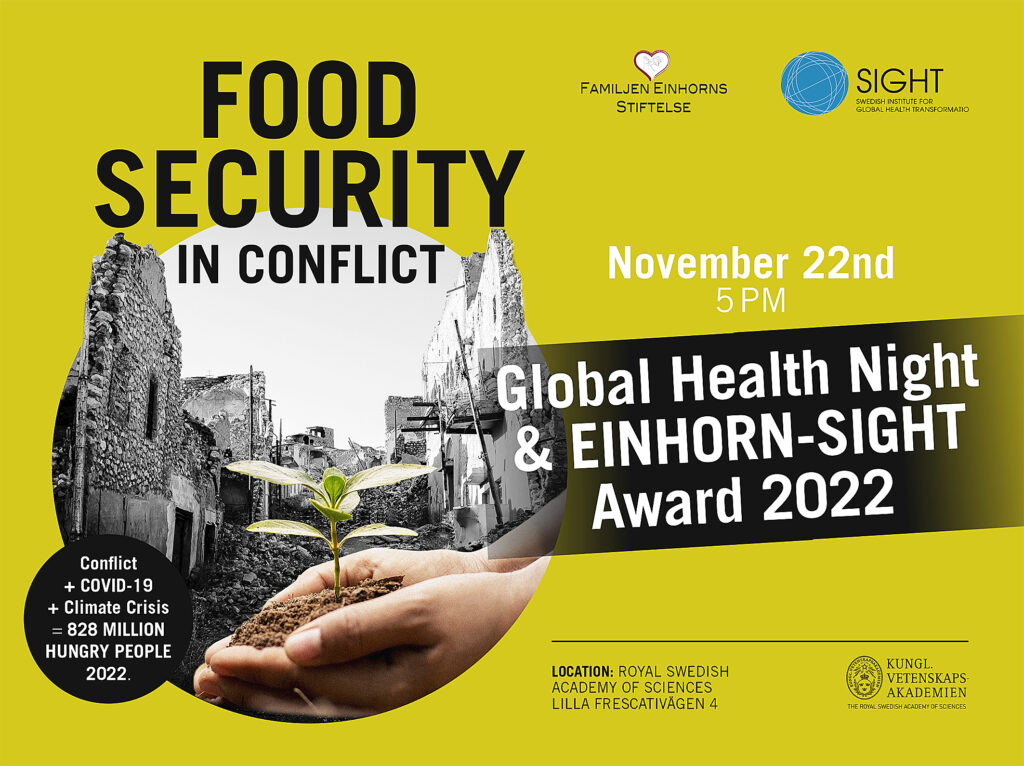 After a long and illustrious career in cancer research, Karolinska Institute (KI) professor Stefan Einhorn has become a prolific author and lecturer. The proceeds of his first bestseller ‘The Art of Being Kind,’ published in 19 languages, jump-started his charitable foundation.

“When you earn more than you need, you have to share your spoils,” says Einhorn, who started the Einhorn Family Foundation together with his wife Susanne and Sanny Moskovits, a close friend, is attempting to put a dent in child mortality in the world.

The interview has barely begun. Yet, Einhorn firmly unravels the thread that ties together his work and life today: the Talmudic principle describing the infinite value of each individual. This is often summarized by the famous quote: ‘He Who Saves One Life Saves the World.’

“It is cheaper to save lives in low-income countries, and all lives are of equal value” says Einhorn. “That’s why our foundation focuses on supporting research that creates the best possible health for children in these places.”

Two such children’s projects supported by the Einhorn Family Foundation include a cancer project in Uganda and a maternity care center in Nepal. To put it into perspective, cancer treatment for a child in Sweden costs around one million kronor. In Uganda, the corresponding treatment costs approximately SEK 10,000, says Einhorn.

Anyone familiar with Einhorn’s books would be easily tempted to ask him the big questions about life, human relationships, goodness, evil, or the meaning of everything upon meeting him. And Einhorn gladly obliges. He doesn’t shy away from these lofty topics and is equally fluent in discussing the seven deadly sins, the way humans have a knack for self-destruction, paths to wisdom, or just the existence of God. Right now, he is writing a new book about opinions, together with Folke Tersman, Professor of Practical Philosophy at Uppsala University.

While we’re on the subject of life’s big issues, what are your thoughts on the state of the world today? It doesn’t look very rosy, does it?

“Everything was going well for a series of years. Hunger in the world and child mortality decreased. Then came the pandemic. One thing led to another. The vaccination rate of children is falling. There are many parameters right now that are worrying. We are standing in the balance and it can go either way,” says Einhorn. “So, we have to do what we can to nudge things along in the right direction.”

When it comes to children in low-income countries, far too little is said about malnutrition and the consequences this creates for children’s development, Einhorn believes.

“World-changing methods are not that complicated when you look at the whole picture. It can be as simple as learning to live with the resources at hand or learning to grow food on the small patch of land you have. Often much can be gained with proper information and education,” says Einhorn.

The Einhorn Family Foundation disburses approximately SEK 1 million per year, primarily to research projects run by university groups. Of this, SEK 100,000 per year is earmarked for the Einhorn SIGHT Award. Next time, the prize will be awarded on November 22 at the Royal Swedish Academy in connection with Global Health Night, an event organized by SIGHT and its student network in various disciplines.

What do you want to achieve with the Einhorn SIGHT AWARD?

“We would like prize winners to continue their research. Research budgets are much larger than our SEK 100,000 prize money, but the award should encourage researchers to contribute to a better world,” says Einhorn.

Of course, it is a challenge to find good projects to support. According to Einhorn, the best projects for the foundation tend to be in the start-up phase and are often underestimated by those around them. In 2016, Stefan Einhorn together with Professor Göran Tomson, co-founder of SIGHT, wrote an editorial in Dagens Nyheter about the effect of generosity and how charitable efforts can and should be evaluated. Proper reporting data, like before and after intervention measurements, are vital to ensure the charity is based on ‘solid scientific evidence,’ they concluded.

“The projects we support have a dual effect – children’s lives are saved during ongoing projects and long-term knowledge is developed thanks to the project,” says Einhorn.

In addition to running the foundation, authoring books, and teaching at the Karolinska Institute, Stefan Einhorn is also chairman of the Center for Social Sustainability (CSS), an interdisciplinary research and education center at KI that focuses on sustainability in the realm of people, groups, communities, animals, and nature.

“For us to function as individuals, at group level, and in society, compassion, wisdom, trust, and altruism are required,” says Einhorn.

At CSS, the intention is to develop research projects on social sustainability, connect researchers and provide training on the subject.

But sustainability is a thorny and loose concept that is often misunderstood. Einhorn is quick to add some meat to the bones with concrete examples from his foundation.

“It would be easy to conclude that what we do is unsustainable. For some, supporting the reduction of child mortality in situations where poor families in low-income countries still give birth to more children who remain in poverty and misery maybe doesn’t add up. But that is not true. Reduced child mortality in low-income countries means that families have fewer children, and those children are thus better off,” he explains.

In several of Stefan Einhorn’s books, he returns often to the expression ‘Tikun Olam’ which comes from an alternative creation story told within Judaism.

‘Tikun Olam’ is based on the fact that every single person has a responsibility to repair the part of the world that has broken. But even if the responsibility rests on the shoulders of each individual, change happens and is fostered together with other people, contributing to the healing of the world,” he says.

Is this what you call wisdom? After all, you wrote the book on the subject, ‘Paths to Wisdom.’

“Wisdom is not strange or difficult,” says Einhorn. “Wisdom is about problem-solving. But we as humans are all over the place – wise one day and stupid the next. But we can all at least be curious about how to improve our problem-solving skills. Find out what characteristics and qualities are required.”

Einhorn believes that humility, empathy, compassion, the ability to see consequences, life experience, and curiosity are all problem-solving qualities that can make us wiser as people.

“Wisdom is not innate. It’s an attribute that everyone can develop. The first step is to want to become a wiser person. Everyone has the potential to become one. And it is not possible to be both evil and wise at the same time,” Einhorn concludes in his philosophical tone.

Stefan Einhorn is Professor of Molecular Oncology at Karolinska Institute. He is the author of a large number of popular science books on medicine and fiction.

Stefan Einhorn has been working as a lecturer for many years and in 1999 he was named the best teacher at the Karolinska Institute. He lectures frequently about ethics, the art of kindness, leadership, medical ethics, and wisdom.

2020 Ebba Malmqvist Air pollution and health with a focus on pregnant women and children.

2021 Ashish KC Improving maternity care in the wake of the pandemic in Nepal.

The health of the Earth and its people are linked

In Swedish “There is scientific proof that we are in a crisis” Deliang Chen, Professor in Physical Meteorology and a member of the UN’s climate

“The 2030 Agenda is a tremendous reason to do much more for the health of children and adolescents” Text: Ulrica Segersten Gabriel Wikström, formerly minister