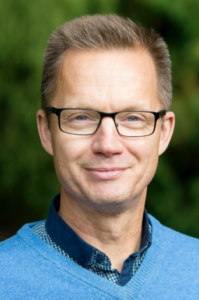 Melinda Gates personally presented the award – SEK 100,000 in prize money and a diploma – to Mårtensson at a ceremony at the Royal Swedish Academy of Sciences in Stockholm in 2017. Also in attendance was Professor Stefan Einhorn, the founder of the Einhorn Family Foundation and instigator of the award (read the interview here).

“For a researcher, it is vital that your subject matter is appreciated and receives visibility outside the research team. Above all, it is a matter of teamwork, and in global health, the people involved are always cross-disciplinary and multinational,” says Andreas Mårtensson, five years after receiving the award.

The gratitude and joy of having received the Einhorn SIGHT Award are long-lasting.

Malaria research is still the focus of Mårtensson’s and his team’s work as many sites in East Africa continue to receive the attention they need. Mårtensson considers himself a simple and down-to-earth researcher. He does not work on developing new drugs against malaria, but rather focuses on using existing drugs and systems as efficiently and with as good a long-term effect as possible. Finding ways to fight the resistance to today’s malaria drugs is high on his agenda.

Malaria is a tropical medical disease and includes parasitic and bacterial infections that affect the very poorest in the world, mostly in sub-Saharan Africa. Malaria is the disease of the poor.

The World Health Summit in Berlin was opened on October 17 on the same calendar day as the International Day for the Eradication of Poverty, which coincided with the day of this interview.

Tedros Adhanom Ghebreyesus, Director-General of the World Health Organization (WHO), said in his opening remarks that global health issues like pandemic responses need to be lifted to a new level of urgency on par with what the world experienced with the Cold War’s Non-Proliferation Treaty (NPT).

But he also highlighted ‘the forgotten’ tropical diseases and that more resources need to be allocated to preventive healthcare. “Healthcare starts in homes, schools, and workplaces,” he said.

Around half a million children, most under the age of five, still die every year from malaria, something that angers the otherwise calm and seemingly good-natured Mårtensson.

“It is primarily the poor who are affected. The preventive measures are not that complicated, and there are medicines. Yet we are witnessing – and allowing – a global health disaster,” he fumes.

Children and death should not be allowed to appear in the same sentence. Both Andreas Mårtensson and Bill and Melinda Gates have the goal to eradicate malaria by 2050. Given the risk of resistance to mosquito repellents and anti-malarial drugs, this goal is urgent. According to the latest World Malaria Report from 2021, 241 million people contracted malaria, and 627,000 of them died from the disease in 2020.

“The need for collaboration in research and teaching in global health is becoming increasingly clear. Rather than creating competition between universities, this kind of joint initiative strengthens both universities and thus Sweden’s role in global health,” says Mårtensson.

Personally, Mårtensson believes that ‘global health’ is a misnomer and ought to be called ‘sustainable health,’ because, at the end of the day, it is all about sustainability.

“The words used to describe the issue are not important. Instead, it is the content of the interdisciplinary subjects that should take precedence. Unfortunately, we are not quite there yet,” he says.

In other words, Uppsala University is well-positioned as a large university to bring into play different disciplines that would not naturally be connected to health. The challenge is to bring in a broader perspective on health from the humanities, technology, and natural sciences, and also from, for example, SLU, which can bring in aspects from the animal and environmental side. Health issues are so complex that researching and working in silos has its limits, claims Mårtensson.

“The paradox is that the broader and more interdisciplinary our studies are, the sharper we get in our findings. We have to get better at creating those meeting places. Sweden can and should get better at this,” he believes.

A generational change is needed
According to Mårtensson, 2030 Agenda is a good tool and basis for fostering this interdisciplinary work.

“We should look beyond 2030. ‘Older’ researchers like myself should avoid sitting on our laurels and becoming complacent. Instead, we need to help younger researchers in global health with employment and other opportunities. I think the SIGHT Fellows program is a good role model and start for this,” says Mårtensson, a fellow himself in the first cohort of SIGHT Fellows program.

“Global health is an attractive field of study for young researchers. And the fact is that many of them are much better at interdisciplinary collaborations than researchers traditionally have been,” he says.

As the first recipient of the Einhorn SIGHT Award, what advice would you like to give this year’s recipient?

“First and foremost, enjoy and appreciate the honor of receiving the award. And do not forget to credit and lift your colleagues and express gratitude to the entire team. Make sure your research area is noticed and use the attention as a springboard to increase the understanding and urgency of what still needs to be accomplished,” says Mårtensson.

And what tips do you have for students who would like to delve further into global health?

“As soon as possible, make sure to get involved in global health student organizations. It is a plus if students find each other early in their commitment and thirst for knowledge. And spend time collaborating with people who intend to build a better world. This is not only good for students, but it is good for the whole world,” concludes Mårtensson.